what do moroccan women wear

Moroccans are extremely hospitable and very tolerant. Though most people are religious, they are generally easy-going, and most young Moroccan women don’t wear a veil, though they may well wear a headscarf. Nonetheless, you should try not to affront people’s religious beliefs, especially those of older, more conservative people, by, for example, wearing skimpy clothes, kissing and cuddling in public, or eating or smoking in the street during Ramadan. 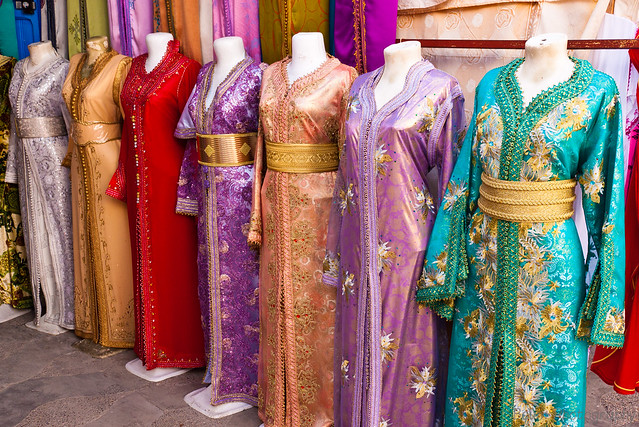 Clothes are particularly important: many Moroccans, especially in rural areas, may be offended by clothes that do not fully cover parts of the body considered “private”, including both legs and shoulders, especially for women. It is true that in cities Moroccan women wear short-sleeved tops and knee-length skirts (and may suffer more harassment as a result), and men may wear sleeveless T-shirts and above-the-knee shorts. However, the Muslim idea of “modest dress” (such as would be acceptable in a mosque, for example) requires women to be covered from wrist to ankle, and men from over the shoulder to below the knee. In rural areas at least, it is a good idea to follow these codes, and definitely a bad idea for women to wear shorts or skirts above the knee, or for members of either sex to wear sleeveless T-shirts or very short shorts. Even ordinary T-shirts may be regarded as underwear, particularly in rural mountain areas. The best guide is to note how Moroccans dress locally.

When invited to a home, you normally take your shoes off before entering the reception rooms – follow your host’s lead. It is customary to take a gift: sweet pastries or tea and sugar are always acceptable, and you might even take meat (by arrangement – a chicken from the countryside for example, still alive of course) to a poorer home.

You’re expected to tip – among others – waiters in cafés (1dh per person) and restaurants (5dh or so in moderate places, 10–15 percent in upmarket places); museum and monument curators (3–5dh); gardiens de voitures (5dh); filling station attendants (3–5dh); and porters who load your baggage onto buses (5dh). Taxi drivers do not expect a tip, but always appreciate one.

Without a doubt, one of the major disappointments of travelling in Morocco if you are not Muslim is not being allowed into its mosques. The only exceptions are the partially restored Almohad structure of Tin Mal in the High Atlas, the similarly disused Great Mosque at Smara in the Western Sahara, the courtyard of the sanctuary-mosque of Moulay Ismail in Meknes and the Hassan II Mosque in Casablanca. Elsewhere, if you are not a believer, you’ll have to be content with an occasional glimpse through open doors, and even in this you should be sensitive: people don’t seem to mind tourists peering into the Kairaouine Mosque in Fez (the country’s most important religious building), but in the country you should never approach a shrine too closely.

This rule applies equally to the numerous whitewashed koubbas – the tombs of marabouts, or local saints (usually domed: koubba actually means “dome”) – and the “monastic” zaouias of the various Sufi brotherhoods. It is a good idea, too, to avoid walking through graveyards, as these also are regarded as sacred places.

There is no doubt that, for women especially, travelling in Morocco is a very different experience from travelling in a Western country. One of the reasons for this is that the separate roles of the sexes are much more defined than they are in the West, and sexual mores much stricter. In villages and small towns, and even in the Medinas of large cities, many women still wear the veil and the street is strictly the man’s domain. Most Moroccan men still expect to marry a virgin, and most women would never smoke a cigarette or drink in a bar, the general presumption being that only prostitutes do such things.

It should be said, however, that such ideas are gradually disappearing among the urban youth, and you will nowadays find some Moroccan women drinking in the more sophisticated bars, and even more often in cafés, which were, until quite recently, an all-male preserve. In the Villes Nouvelles of large cities, and especially in the Casa–Rabat–El Jadida area, and in Marrakesh, you’ll see most women without a veil or even a headscarf. You’ll also see young people of both sexes hanging out together, though you can be sure that opportunities for premarital sex are kept to a minimum. Even in traditional Moroccan societies, mountain Berber women, who do most of the hard work, play a much more open role in society, and rarely use a veil.

Different women seem to have vastly different experiences of sexual harassment in Morocco. Some travellers find it persistent and bothersome, while others have little or no trouble with it at all. Many women compare Morocco favourably with Spain and other parts of southern Europe, but there is no doubt that, in general, harassment of tourists here is more persistent than it is in northern Europe or the English-speaking world.

Harassment will usually consist of men trying to chat you up or even asking directly for sex, and it can be constant and sometimes intimidating. In part this is to do with Moroccan men’s misunderstanding of Western culture and sexual attitudes, and the fact that some think they can get away with taking liberties with tourists that no Moroccan woman would tolerate.

The obvious strategies for getting rid of unwanted attention are the same ones that you would use at home: appear confident and assured and you will avoid a lot of trouble. Making it clear that you have the same standards as your Moroccan counterparts will usually deter all but the most insistent of men. No Moroccan woman would tolerate being groped in the street for example, though they may often have to put up with catcalls and unwanted comments. Traditionally, Moroccan women are coy and aloof, and uninhibited friendliness – especially any kind of physical contact between sexes – may be seen as a come-on, so being polite but formal when talking to men will diminish the chances of misinterpretation. The negative side to this approach is that it can also make it harder for you to get to know people, but after you’ve been in the country for a while, you will probably develop a feel for the sort of men with whom this tactic is necessary. It is also wise not to smoke in public, as some men still seem to think this indicates that you are available for sex.

How you dress is another thing that may reduce harassment. Wearing “modest” clothes (long sleeves, long skirts, baggy rather than tight clothes) will give an impression of respectability. Wearing a headscarf to cover your hair and ears will give this impression even more. One reader told us she felt a headscarf was “the single most important item of dress”, adding that you can pull it over your face as a veil if unwanted male attention makes you feel uncomfortable. Indeed, Western liberals often forget that the purpose of wearing a veil is to protect women rather than to oppress them. However, you will notice that many Moroccan women totally ignore the traditional dress code, and do not suffer excessive harassment as a result. As for immodestly dressed women being taken for prostitutes, the fact is that actual sex workers in Morocco are often veiled from head to foot, as much to disguise their identities as anything else.

Other strategies to steer clear of trouble include avoiding eye contact, mentioning a husband who is nearby, and, if travelling with a boyfriend or just with a male friend, giving the impression that he is your husband. You should also avoid physical contact with Moroccan men, even in a manner that would not be considered sexual at home, since it could easily be misunderstood. If a Moroccan man touches you, on the other hand, he has definitely crossed the line, and you should not be afraid to make a scene. Shouting “Shooma!” (“Shame on you!”) is likely to result in bystanders intervening on your behalf, and a very uncomfortable situation for your assailant.

It is often said that women are second-class citizens in Islamic countries, though educated Muslim women are usually keen to point out that this is a misinterpretation of Islam. While sex equality has a long way to go in Morocco, in some ways, at least in theory, the sexes are not as unequal as they seem. Men traditionally rule in the street, which is their domain, the woman’s being the home. One result is that Moroccan women will receive their friends at home rather than meet them in, say, a café (although this is slowly changing) and this can make it difficult for you to get to know Moroccan women. One place where you can meet up with them is the hammam. It may also be that if you are travelling with a man, Moroccan men will address him rather than you – but this is in fact out of respect for you, not disrespect, and you will not be ignored if you join in the conversation. In any case, however interpreted, Islam most certainly does not condone sexual harassment, and nor do any respectable Moroccans. Being aware of that fact will make it seem a lot less threatening.