The Saadian Tombs are located just outside Marrakech and the site is easily reached if visitors follow the Rue Bab Agnaou from the Djemma el Fna. From the Kasbah Mosque, the route to the tombs is well signposted. After the amazing discovery of the Saadian Tombs in 1917, this breathtaking site has been carefully restored and well cared for as it has become one the most popular attractions in Morocco.

Sultan Ahmed el Mansour constructed the Saadian Tombs in Marrakech during his rule of Morocco in the sixteenth century as a burial ground for himself and his descendants. This led to approximately two hundred members of the Saadian dynasty being buried here, including Sultan Ahmed el Mansour who was laid to rest in 1603. By the year 1672, Moulay Ismail had taken over power in Morocco and went about constructing his own legacy. He had the Badi Palace destroyed, but fortunately he could not bring himself as far as to demolish a place of burial. Instead he decided to seal all the entrances to the Saadian Tombs in Marrakech. The only entrance that was not closed was located within the Kasbah Mosque. And so the beauty and detailed woodwork of this amazing tomb slowly started to slip from memory until it was completely forgotten. 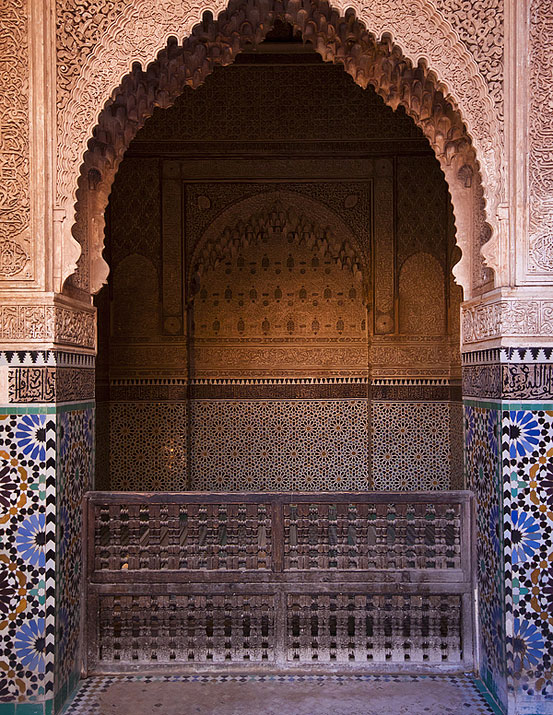 General Hubert Lyautey rediscovered the hidden beauty of the tombs and, on realizing their significant historical importance, immediately started the much needed restoration work. Most of the Saadian dynasty and royal descendants are buried within the mausoleums, with faithful and loyal servants and soldiers being given burial sites within the gardens. The tombs are lavish and breathtaking with the cemetery garden alive with rich fragrances of rosemary and roses, with large palm trees providing shade. Inside the mausoleums the beauty continues and visitors will be surprised by the stunning domed ceilings, detailed wood and marble carvings, mosaics and intricate plasterwork.

The most significant chamber in the tombs is the Hall of Twelve Columns. Here rests the Sultan Ahmed el Mansour and his entire family. This chamber is complete with vaulted roof, columns of Italian marble, beautifully decorated cedar doors and carved wooden screens. Inside the inner mausoleum lies Mohammed esh Sheikh, founder of the Saadian dynasty, as well as the tomb of the Sultan's mother.

One can only wonder how much the Saadian Tombs would have cost to construct today. With beauty, detail and luxury incorporated in every room, from the floor to the ceiling, it is not hard to see why these tombs have become one of the most visited attractions in Morocco.